Food Export Association of the Midwest USA (Food Export–Midwest) is a non-profit organization created in 1969 as a cooperative effort between 13 Midwestern state agricultural promotion agencies and the United States Department of Agriculture's Foreign Agricultural Service (FAS).

Our purpose is to provide a wide range of services to facilitate trade between Midwestern food suppliers and importers around the world.

The Midwest is one of the world’s leading food-producing areas. It’s home to hundreds of companies that provide consumers around the globe with high quality processed food and agricultural products. Midwestern farmers harvest a wide variety of products including grain, oilseeds, livestock, dairy, beans, fruits, and vegetables. 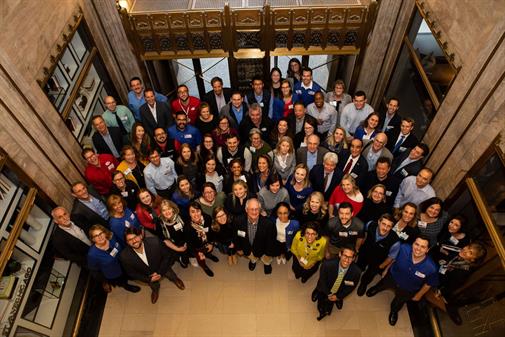 Our team of experts in international markets is based in Chicago, Illinois, and works alongside state member agencies, the USDA, and Foreign Agriculture Service (FAS) to help you identify real market opportunities and become export ready.

Tim Hamilton is Executive Director of the Food Export Association of the Midwest USA and Food Export USA-Northeast. Together these associations offer international trade development services to U.S. exporters to over 40 countries around the world. Tim and his team work directly with the U.S. food industry, government officials, importers and distributors throughout the world to design and implement export development and promotion activities for U.S. food and agricultural products. Tim also leads programs that provide financial support to U.S. exporters of food and agricultural products through funding from the U.S. Department of Agriculture's Market Access Program.

Tim has experience in both food manufacturing and international agriculture. Prior to joining Food Export-Midwest in 1991 and Food Export-Northeast in 2000, Tim was the general manager of a Chicago-based natural foods producer. Early in his career he was a volunteer in the U.S. Peace Corps in Ghana, West Africa. As an agricultural extension agent, he focused on increasing food production by working directly with farmers and ranchers in a remote region of the country. A Wisconsin native, Tim holds a Bachelor's Degree in Economics from the University of Notre Dame and a Master of International Business from DePaul University in Chicago.

Michelle has been working at Food Export-Midwest since August 1997. Michelle has held a variety of positions during her time with the organization. Michelle received her undergraduate degree in Political Science from DePaul University.

In her position as Deputy Director, Michelle works closely with the Executive Director on office operations to ensure that the organization's overall mission always remains the top priority. Michelle is a native Chicagoan and grew up in Pilsen, located on the South Side of Chicago.

Molly joined Food Export–Midwest in June 2012. She previously held the position of a Liaison, conducting outreach for various Food Export programs and serving as a key point-of-contact for clients in her region. Raised in Omaha, Nebraska, she attended Loyola University Chicago and majored in International Studies. While at Loyola she had the opportunity to study abroad in Italy and China, experiences that greatly increased her interest in international trade and assisting with U.S. exports.

In her free time, Molly likes to run, brunch, and explore Chicago’s many neighborhoods.

Greg is a longtime (and 3rd generation!) Chicagoan, and he’s also lived in Cleveland, Boston and Germany.  He is no stranger to Food Export-Midwest and Food Export-Northeast, having worked for the organizations in various communications and export education roles in the past.  He has also been self-employed as a massage therapist and health coach and is passionate about all kinds of food and healthy living. Greg received his B.A. from Tufts University in International Relations and German.

In his free time, he really needs to brush up on his Spanish so he can keep up with his son who is enrolled in a bilingual elementary school.

Rob joined Food Export Association in August of 2002, after working the previous 10 years in various managerial accounting capacities. His most recent prior experience was as the Vice President of Finance for Heartland Alliance for Human Needs and Human Rights, a Midwest-based social services organization.

Rob was raised on the south side of Chicago, and currently resides in the downtown area. He holds a Bachelor's Degree in Computer Science from Harvard University, and received his CPA license in 1997. An avid golfer, Rob enjoys spending the summer playing at all of the great courses in the area.

Teresa Miller grew up in Mexico City, but she discovered the Midwest as an exchange student during her sophomore year in high school in Shawano, Wisconsin. Preferring the snow and cold over sunny Mexico, she returned to the Midwest for graduate school at the University of Wisconsin.

Mike became the IT Administrator for Food Export-Midwest and Food Export-Northeast in October 2010. He is originally from the suburbs north of Chicago. He spent the past 12 years in southern Illinois, where he received his Bachelor’s Degree in Information Systems Technologies and Master’s Degree in Geographic Information Systems from Southern Illinois University Carbondale (SIUC).

Prior to returning to the Chicago area, Mike worked at SIUC at the Center for Rural Health and Social Service Development on the Rural Medical Transportation Network Project, providing GIS expertise to the project and serving as LAN Administrator for the department.

Paul joined Food Export-Midwest in September of 2011 as a Liaison. Paul serves as the point of contact for all companies in his region who utilize Food Export-Midwest's programs and services, and also looks to develop new relationships with U.S. food producers.

Paul earned his Bachelor's Degree in Agriculture Economics with a focus on international trade from the University of Illinois (Urbana-Champaign). He gained international exposure and Spanish language skills while studying abroad in both Argentina and Costa Rica. Paul's interests include traveling, camping, volunteering, sports and learning to play the drums.

A Saint Paul, Minnesota native, Brendan has worked for the Food Export Association of the Midwest USA since 2013.

Brendan worked in Moscow, Russia prior to moving to Chicago. In his free time, you can find him on a riverboat giving tours as a volunteer docent at the Chicago Architecture Center.

Femke joined Food Export-Midwest in March 2016 as part of the International Marketing Program. She was born and raised in the Netherlands, but has lived in Singapore and South Africa as well. She graduated from the University of Groningen in the Netherlands with a Bachelor’s degree in International Business and Management and a Master’s degree in Marketing Management.

Prior to joining Food Export, Femke worked for two non-profit organizations in Chicago that work with inner-city youth. In her free time, she enjoys traveling, volunteering, and discovering new places to eat in Chicago.

Laura was born and raised in the Chicago area and joined Food Export-Midwest as the Administrative Assistant in March of 2011. She joined the International Marketing Program in 2013 and became the Communications Coordinator - Publications in March 2015. Prior to her employment at Food Export-Midwest, she has worked supporting corporate executives at electronics and advertising firms.

In her spare time, Laura enjoys vacationing on a tropical beach, exploring new restaurants and spending time with her family.

Pamela is a lifelong Chicagoan, born and raised.  She joined Food Export-Midwest in November 2019.    This seasoned professional comes to Food Export with over 30 years of executive level administrative experience.  She has previously worked for the City of Chicago with her most recent tenor being in the Private Sector.   Pamela studied at Illinois State University before beginning her professional career.

Katie LaBarge joined Food Export–Midwest in November 2019 as part of the Branded Program. Originally from Chicago, Katie graduated from Xavier University in Cincinnati, Ohio with a B.A. in Sociology. She has worked at a number of nonprofits in Chicago,  Ohio, and northern Kentucky, and spent a year teaching English in South Korea. Before joining Food Export, Katie worked for a small accounting and tax preparation firm and is very happy to have returned to the nonprofit sector.

Matthew joined Food Export-Midwest in 2020 as a Liaison, having previously worked as a cook in the northern suburbs of Chicago, an assistant brewer in Maryland, and a bagel baker in New Orleans. He most recently worked for a specialty food distributor in South Louisiana as a sales and service representative.

Matthew graduated in 2015 from the University of New Orleans with a Bachelor’s in Hospitality, Restaurant, and Tourism Administration.

In his spare time Matthew likes to cook, bake, read, and eat weird things he hasn’t eaten before.

Matt joined Food Export-Midwest and Food Export-Northeast in April 2018. He received his A.A.S in Cyber Security in December 2017. Matt had interned at JJC for 2 semesters, one with the Networking Department and one with the Help Desk Department. While in school Matt was able to participate in 2 National Cyber League competitions were he placed 26th out of 2077 competitors and 69th out of 2423 competitors.

Matt was born and raised in the southwest suburbs of Chicago were he still lives. In his free time Matt enjoys playing video games, disc golfing, bowling, and of course sleeping.

Adolfo joined Food Export-Midwest in the fall of 2010. He is originally from Houston, TX and graduated from The University of Texas at Austin with a B.S. in Communications. Prior to his employment with Food Export-Midwest, he worked in marketing with the WNBA, Clear Channel Radio, the Austin Marathon and in project management. He also spent time as a legislative intern with former Congressman Ken Bentsen.

In his free time he enjoys discovering new places in the city, outdoors activities and traveling.

Tia joined Food Export–Northeast in August 2020 as a Communications Associate. She graduated in May 2020 and received her Bachelor of Business Administration Degree in Marketing from Temple University’s Fox School of Business. Tia has had multiple internship experiences, all in marketing, prior to her graduation from Temple – including an international marketing internship right here at Food Export.

In her free time, Tia enjoys spending time outside running and hiking, discovering new restaurants in the city, and spending time with friends and family.

Zdenka joined the International Marketing Program Team at Food Export-Midwest in November 2021. She grew up in the Czech Republic where she also obtained her Master’s in International Relations at Charles University in Prague. Her passion for languages and different cultures led her to spend a great chunk of her life exploring the world – whether it was through study abroad programs or in serving the U.S. government in several countries as part of a diplomatic and military family.

Zdenka has a background in trade promotion and export education, having worked for several years at a Czech government export promotion agency, including a stint in one of its foreign offices in the U.S. She also worked as a project coordinator for various European non-profit organizations promoting human rights and inter-cultural bridgebuilding. She is a dedicated polyglot who likes to tutor and translate in her free time. You might spot her Nordic walking or biking with her family around northern suburbs. Zdenka volunteers for the Chicago Czech-American school and promotes citizen diplomacy through a local sister cities program.

A lifelong Wisconsinite, Paul moved to Chicago and joined the Food Export-Midwest team in July 2016. He graduated from the University of Wisconsin-Madison with a B.S. in Agriculture and Applied Economics and a Certificate in Development Economics. Prior to joining Food Export, Paul worked as an intern for a non-profit that helped educate dairy producers from around the world.

Veronica received her undergraduate degree in Paralegal Studies and is seeking to complete her Master's in Forensics Psychology.

In her free time, she enjoys reading, watching documentaries and sports, and spending time with her family.