Following the first-ever Shellfish Trade Mission to the Netherlands and France in September, we reached out to our two European-based Seafood In-Market Representatives – Alexander Wever with AWF Fisch Consulting and Felipe Macías with FM Consulting – to ask them about the potential of each market and what barriers may exist for Northeast US oyster suppliers. Both attended the trade mission and saw first-hand the response from buyers. See what they have to say below. 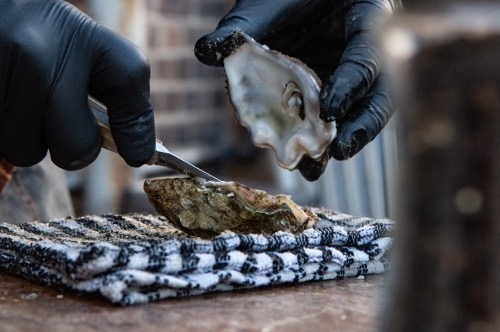 Could you talk about the importance of Dutch importers to the distribution of seafood throughout Europe, especially shellfish?

For centuries, the Dutch have been famous for their skills in trading to all of Europe, especially in the seafood sector. Yerseke is a village situated on the southern shore of the Oosterschelde estuary in the Dutch province of Zeeland and is THE hub for blue mussels and other shellfish in Europe. Daily, this location supplies almost all other seafood hubs in Europe. Many of the Dutch importers and traders also have a live lobster business with North America and are experienced with air freight imports.

What was the reception by Dutch importers to Northeast U.S. shellfish (oysters and clams – taste, size, quality, comparability to their species for pricing, interest, distribution channels) during the recent mission?

The reception to these specific Northeast US seafood products was very positive. They were noted for their quality.  Dutch buyers thought US oysters were a bit smaller on average than EU oysters, and they thought a potentially significant distribution channel could be food service, especially if it is centered around special offers like “oyster of the month.” There was also a high degree of interest in the importing and exporting Dutch oysters to the US.

What insights did you gain that you could share to better prepare Northeast growers?

Packaging will probably be the biggest challenge for Northeast seafood suppliers. Dutch buyers prefer smaller lots rather than bags filled with 100s of loose oysters, and they want the packaging to be drip-free with the oysters cupped sized down. Telling the story of Northeast oysters and connecting the unique flavor profiles to their point of origin will be extremely important to convey to Dutch buyers. It’s a little bit like good wine: there is the taste, but there is the story behind it – where the oysters are grown and how this results in the specific look of the product and the people who have farmed it.

What do you see as the opportunities for Northeast U.S. shellfish (oysters & clams) in France?

France is by far the first market in Europe that we should target to promote Northeast US oysters. France is the largest producer and consumer of oysters in Europe with 65% of French people consuming oysters (regularly or occasionally). The French are generally good connoisseurs of the different types of local oysters currently sold in market. This consumer profile could help drive potential growth for Northeast US suppliers because there is already an openness to trying new species and non-French origins.

There is also no evidence of market opposition to imported oysters. In fact, some French oyster producers started to farm these delicacies in other countries years ago (Gillardeau in Ireland, Tarbouriech in Spain), and French consumers do not perceive this as a problem. This willingness to consume oysters from other countries could certainly be beneficial to Northeast US oyster suppliers.

Due to the size of the market, the high levels of consumption, and consumer knowledge, France offers opportunities to Northeast US oyster exporters.

Where is shellfish primarily eaten in France – in restaurants or at home?

As far as sales are concerned, half of all oysters (produced by local growers) are sold at seafood auction markets located on the Atlantic and Mediterranean coast. This is where restaurants and fishmongers get their supplies. Additionally, some consumers purchase directly at these auctions.

The remaining half of all oysters (locally produced or imported) is channeled through importers and wholesale distributors, which in turn sell to the restaurant sector and large purchasing groups (which sell to supermarket chains, cash & carry and collective catering companies).

Oyster consumption is very seasonal with 40%-50% occurring in December and January. Some distributors and producers are developing strategies to spread oyster sales from September to April.

For French oyster consumers, the main selection criteria remain size, meat content (special, fine…) and provenance. Official quality/origin certifications are also something that consumers value highly. The Fine de Claire oysters are the most sold in France. The softness of the meat and moderate prices of these oysters makes them a great product for French consumers.

What was the reception by French importers & chefs to Northeast U.S. shellfish during the recent mission?  What insights did you gain that you could share to better prepare the Northeast growers?

Prior to this mission, we have been in contact with various French wholesalers specializing in oysters. In principle, they demonstrated a certain indifference to the possibility of importing oysters from the US due to the belief that local production is simply better.

However, after the mission, and after hearing the impressions of some buyers who had spoken with the US exporters and had tasted their oysters, there was a rather positive perception. US shellfish was perceived as having some interesting organoleptic characteristics. It also seems that prices may be in line to compete with the local product. While building sales will take time, and we should not expect large sales in the first few months, it seems that a certain interest has been awakened.

More promotion will be needed, more sample shipments, perhaps visits from French buyers to the US, and of course a certain amount of patience. The first step has been taken, and the result has been quite positive.

About Food Export USA–Northeast With its extensive programs and educational offerings, Food Export USA–Northeast (Food Export–Northeast) is recognized as the preeminent expert and cost-effective resource for Northeast seafood and agricultural suppliers looking to sell their products overseas. Founded in 1973, Food Export–Northeast is a non-profit organization that works collaboratively with its 10 member states’ agricultural promotion agencies from Connecticut, Delaware, Maine, Massachusetts, New Hampshire, New Jersey, New York, Pennsylvania, Rhode Island, and Vermont, to facilitate trade between suppliers and worldwide importers and to promote the export of food, agricultural and seafood products from those states. Since its founding, the organization has helped Northeast seafood suppliers gain access to a broad range of export markets, supported overseas in-market educational and promotional programs, and offers emerging suppliers access to funds to help grow their export business. The organization is funded through the Market Access Program (MAP), administered by the USDA’s Foreign Agricultural Service. Learn more about us and what we do for the Northeast seafood industry here.  Contact us.