Below is the full news release that was published by the Coalition to Promote U.S. Agricultural Exports about the study. Beneath the press release we also included several infographics that were created about the results of the study for anyone that is more of a visual learner.

You can also learn more at https://agexportscount.com/

In letters sent April 27, 2022, members of the Coalition and additional organizations asked U.S. House and Senate agricultural appropriations subcommittee leadership to maintain funding of at least $200 million for the Market Access Program (MAP) and $34.5 million for the Foreign Market Development (FMD) program in FY2023. Citing strong competition for growing global food demand, the organizations said “these modest investments, paired with full private-sector cost share, are invaluable as we race to reclaim global export markets shut off during the pandemic and diversify markets amid war and geopolitical unrest.”

The econometric study conducted by IHS Markit and Texas A&M University agricultural economists Dr. Gary Williams and Dr. Oral Capps showed export programs have added an average of $9.6 billion per year to export value between 1977 and 2019. For farmers, livestock producers and dairy operators, the study showed MAP and FMD increased cash receipts by $12.2 billion per year. The programs also added 225,800 new jobs across the entire U.S. economy, the study indicated.

“Our work indicated that MAP and FMD have accounted for 13.7%, or almost $648 billion, of all the revenue generated by U.S. agricultural exports between 1977 and 2019,” said Dr. Williams. “The additional export revenue bolsters the entire U.S agricultural sector and creates a multiplier effect throughout the U.S. economy.”

The MAP and FMD programs are funded through the Agricultural Trade Promotion and Facilitation program in the 2018 Farm Bill and administered by USDA’s Foreign Agricultural Service (FAS). MAP and FMD offer competitive grants for export development and promotion activities to non-profit agriculture organizations that contribute funds from checkoff programs and industry support.

The federal budget for MAP has been fixed at $200 million per year since 2006 and FMD’s $34.5 million annual budget has not changed since 2002. The HIS Markit study reported that market development programs also leveraged cooperator and industry contributions, averaging between 70% to 77% of expenditures from 2013 to 2019, valued at an estimated annual average of $567 million.

The study also analyzed the potential impact of the Agricultural Trade Promotion (ATP) program that USDA established in 2019.

The ATP program provided $300 million to cooperating organizations, to which they contributed $90 million in cash, goods and services. The study’s analysis of future expected return from those investments between 2019 and 2026 predicts that incremental funding for agricultural export market development will provide an excellent return.

U.S. Grains Council (USGC), the export market development organization for feed grains and ethanol, led the study’s preparation on behalf of FAS and the cooperator community using ATP funds. USGC is working on a second, qualitative evaluation of ATP, due to be released later in 2022, in cooperation with FAS, the Distilled Spirits Council of the United States, the U.S. Highbush Blueberry Council, and the USA Poultry and Egg Export Council.

The full study, the Coalition letters to congressional appropriators, and more information about the value of U.S. agricultural exports are available at http://www.AgExportsCount.org.

More about the MAP, FMD and ATP programs are available at: 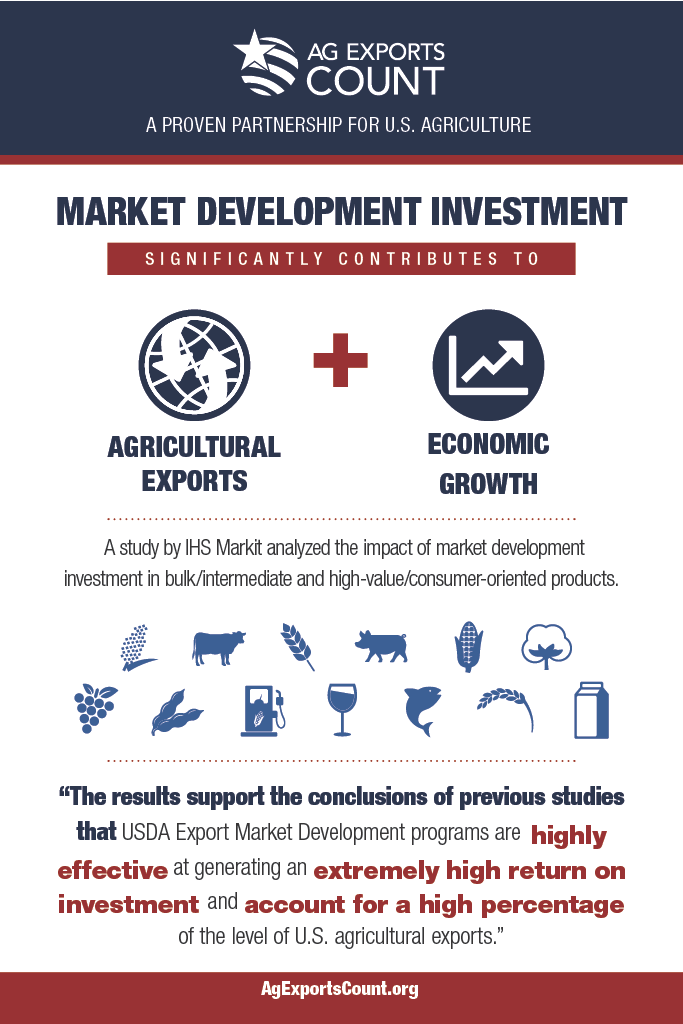 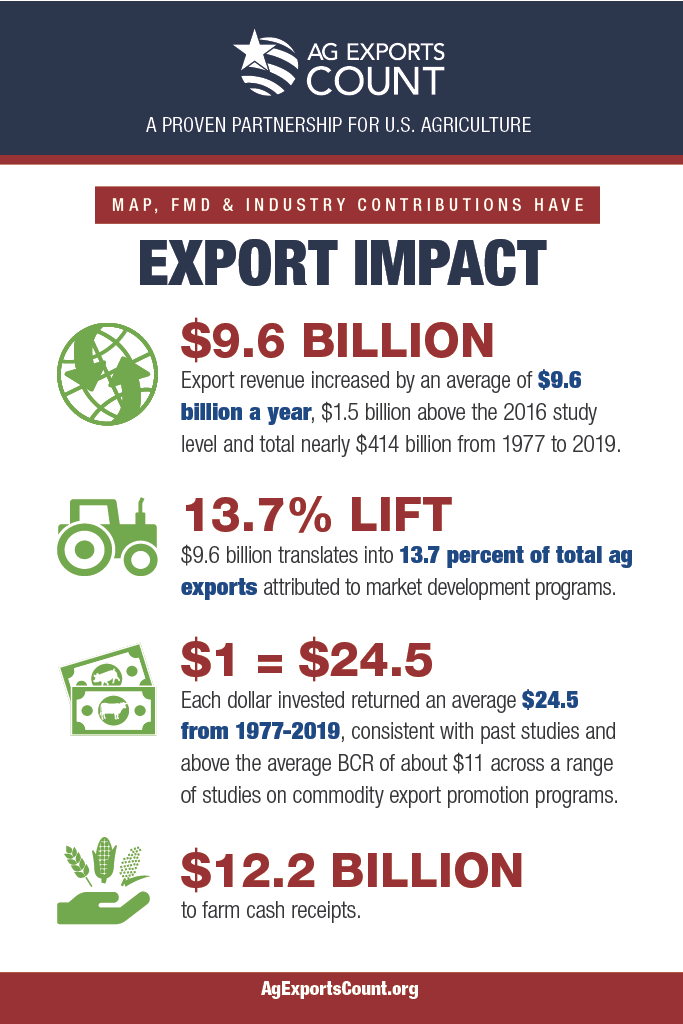 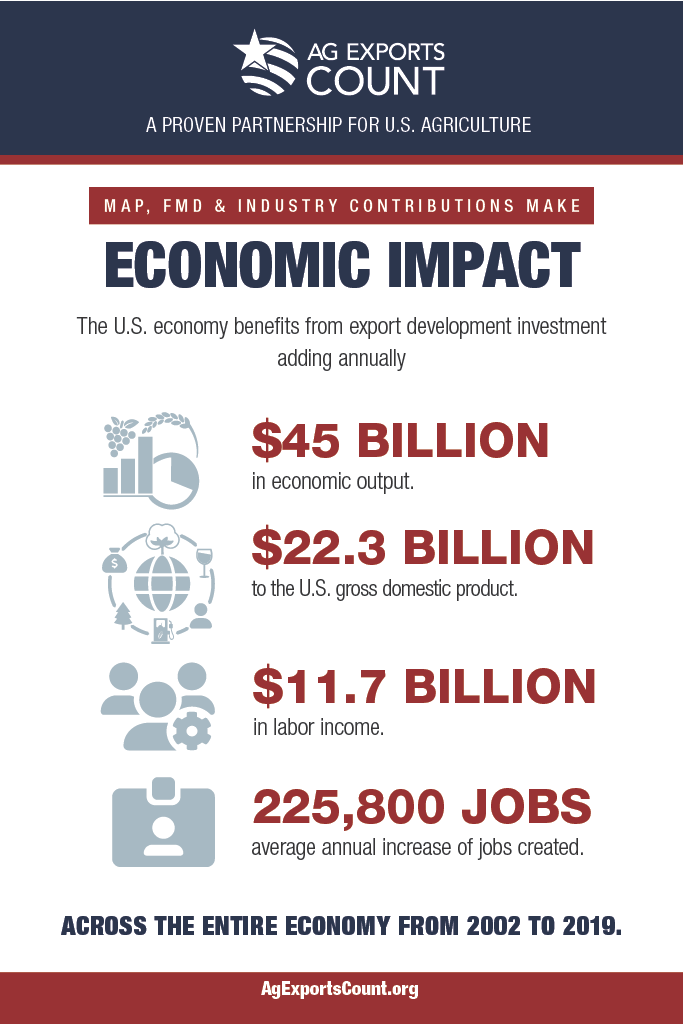 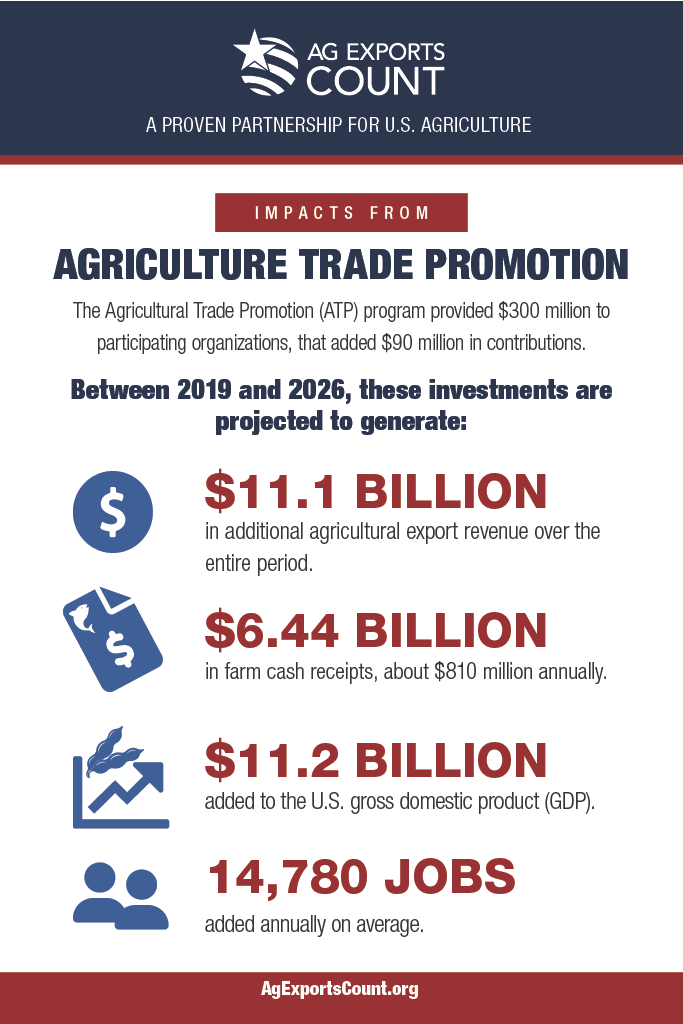